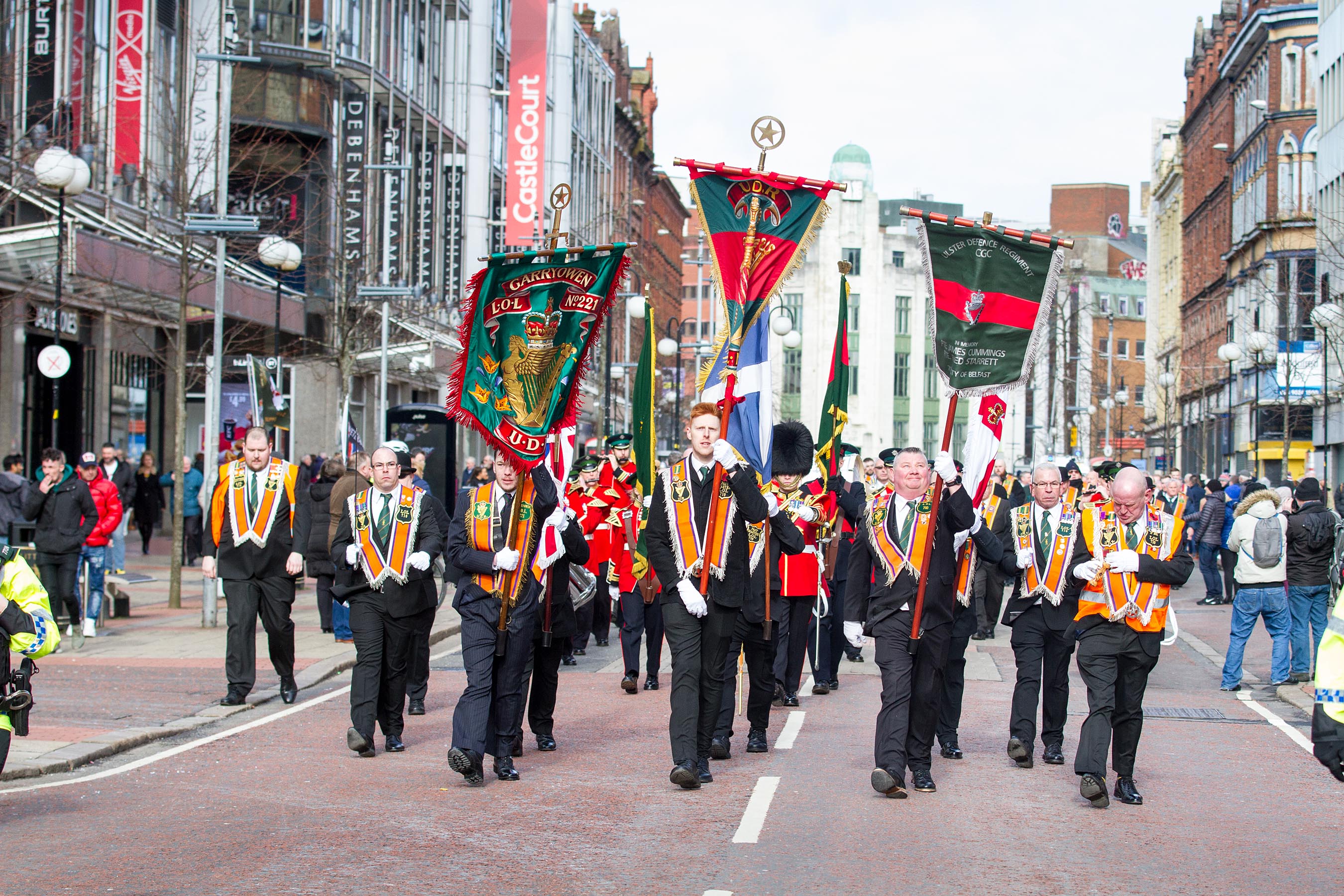 The annual memorial parade and service of remembrance to mark the murder of two young UDR soldiers who were also members of the Orange Institution took place in Belfast on Saturday, February 29.

The parade, organised by Ulster Defenders of the Realm LOL 710, which was formed 26 years ago, is regarded as the first major parade of the year.

The event saw a wreath-laying ceremony at the scene of the atrocity and a service of remembrance conducted by Rev. David McIlveen.

Relatives of the deceased were also present.

Frederick Starrett and James Cummings, both 22, were killed by an IRA booby-trap device as they arrived to close the security gates on Royal Avenue on February 24, 1988. Both soldiers were members of lodges in Ballymacarrett No 6 District; Banner of the Cross LOL 1310 and Johnston’s Golden Star LOL 1934 respectively.

The parade made its way from Templemore Avenue to Royal Avenue.

Worshipful Master of LOL 710, David McGrath, said: “This memorial parade continues to be one of the most important parades in the lodge calendar. The large numbers present will be a fitting tribute to Fred and James and show their families that the sacrifice of these two young men is not forgotten, as we honour their memory.”

The bands on parade were Pride of the Raven Flute, Millar Memorial Flute, Legananny Accordion and Ballymena Corps of Drums.

Published on the 2nd March 2020
Article taken from the Grand Orange Lodge of Ireland
Share this:
Previous Article

Limavady District LOL No.6 express their complete opposition to the NI Protocol and re-affirm our total commitment to the maintenance of the Union.

Close Menu
We use cookies on our website to give you the most relevant experience by remembering your preferences and repeat visits. By clicking “Accept All”, you consent to the use of ALL the cookies. However, you may visit "Cookie Settings" to provide a controlled consent.
Cookie SettingsAccept All
Manage consent

This website uses cookies to improve your experience while you navigate through the website. Out of these, the cookies that are categorized as necessary are stored on your browser as they are essential for the working of basic functionalities of the website. We also use third-party cookies that help us analyze and understand how you use this website. These cookies will be stored in your browser only with your consent. You also have the option to opt-out of these cookies. But opting out of some of these cookies may affect your browsing experience.
Necessary Always Enabled
Necessary cookies are absolutely essential for the website to function properly. These cookies ensure basic functionalities and security features of the website, anonymously.
Analytics
Analytical cookies are used to understand how visitors interact with the website. These cookies help provide information on metrics the number of visitors, bounce rate, traffic source, etc.
SAVE & ACCEPT
Posting....