Hundreds of Ulster-Scots performers came together at Stormont earlier to create this memorable Platinum Jubilee tribute to Her Majesty the Queen. 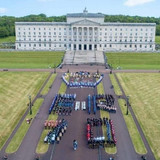 More than 350 individuals, drawn from Highland and Scottish Country dancers and musicians from 24 bands including pipe, flute, accordion and silver took part in the display, which was organised by the Ulster-Scots Agency.

Participants from across Northern Ireland were joined by a contingent from East Donegal and the group included local members from the Royal Scottish Country Dance Society and the Royal Scottish Pipe Band Association, which have long standing connections to the Sovereign.

Thanks to all who made this possible.

Article taken from the Ulster-Scots Agency
Share this:
Previous Article

This programme is designed to increase the quality of music-making in the community by helping bands to replace worn-out instruments and purchase new instruments.

The actions of the PSNI in Londonderry towards the Clyde Valley Flute Band have caused a huge amount of anger and ill will towards the PSNI.

Close Menu
We use cookies on our website to give you the most relevant experience by remembering your preferences and repeat visits. By clicking “Accept All”, you consent to the use of ALL the cookies. However, you may visit "Cookie Settings" to provide a controlled consent.
Cookie SettingsAccept All
Manage consent

This website uses cookies to improve your experience while you navigate through the website. Out of these, the cookies that are categorized as necessary are stored on your browser as they are essential for the working of basic functionalities of the website. We also use third-party cookies that help us analyze and understand how you use this website. These cookies will be stored in your browser only with your consent. You also have the option to opt-out of these cookies. But opting out of some of these cookies may affect your browsing experience.
Necessary Always Enabled
Necessary cookies are absolutely essential for the website to function properly. These cookies ensure basic functionalities and security features of the website, anonymously.
Analytics
Analytical cookies are used to understand how visitors interact with the website. These cookies help provide information on metrics the number of visitors, bounce rate, traffic source, etc.
SAVE & ACCEPT
Posting....