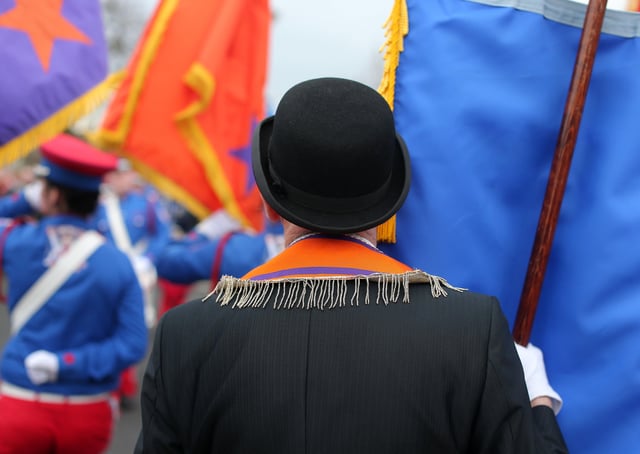 The Orange Order has said a “clear bias” in sections of the Scottish press against the institution needs to be addressed.

It comes after 14 people were arrested during Orange parades in Glasgow on Saturday.

The Orange Order said none of those arrested were participating in the parade adding that “the actions of a few followers who ignored the organisers clear appeals for respect and tolerance should not dominate the narrative of what was a great display of colour, music, and pageantry.”

Chief Superintendent Mark Sutherland, divisional commander for Greater Glasgow, said: “Officers in Glasgow made a total of 14 arrests during the Orange Order processions on Saturday, the offences were primarily for public disorder and acts of anti-social behaviour, but also included sectarian-related breach of the peace.

“There were outbreaks of racist and sectarian singing by some of those who attended to support the processions, this is utterly unacceptable and we completely condemn this behaviour. We are aware of videos circulating that show some of this hateful singing and are already investigating a number of these.

“Our main priority throughout the event was to maintain public safety and ensure minimum disruption to the wider public.”

The Grand Orange Lodge of Ireland said Grand Master Edward Stevenson along with other senior officers from Grand lodge of Ireland were “privileged” to take part in the Glasgow parade to celebrate the 200th anniversary of the first Boyne Anniversary parade in the city.

A GOLI spokesman said: “It was a wonderful day, with large numbers on parade and great crowds spectating. The event was well marshalled and was a credit to the organisers who had liaised regularly with police and civic authorities.

“The Grand Orange Lodge of Scotland have confirmed that no parade participants were arrested and have challenged the Scottish press on their partisan and inaccurate coverage of the event. The actions of a few followers who ignored the organisers clear appeals for respect and tolerance should not dominate the narrative of what was a great display of colour, music, and pageantry.

“Both the Grand Lodge of Ireland and Grand Lodge of Scotland are on record as having condemned illegality and intolerant behaviour which constitutes hate crime.

“Sadly, in Scotland there is clear bias in sections of the press against the Orange Institution which needs to be recognised and addressed. Such commentary, rather than simply reporting the facts, often has the effect of further perpetuating division.”

Published on the 22nd of September 2021
Article taken from the Belfast News Letter
Share this: