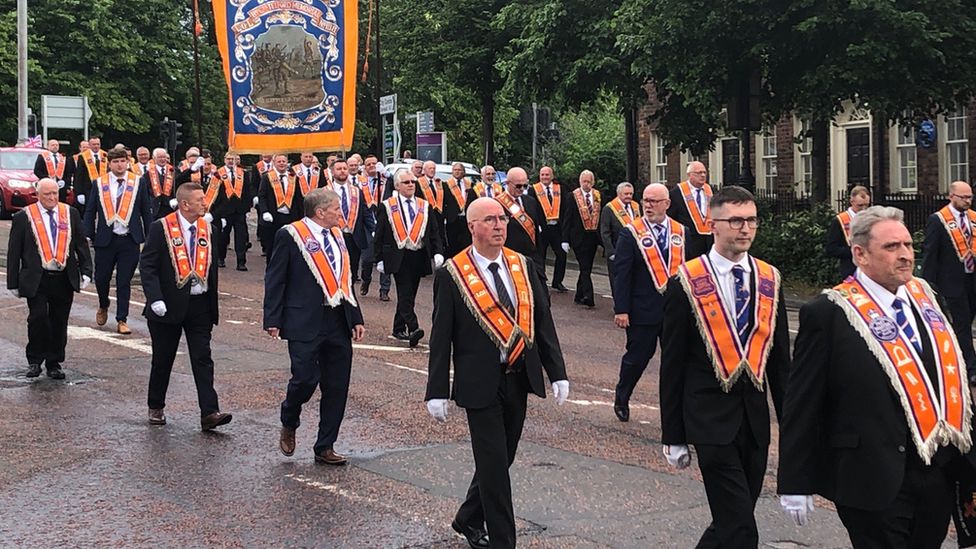 About 100 Orange Order parades have taken place across Northern Ireland in a more localised Twelfth of July than usual.

Organisers said they would stick to plans for parades of 500 people due to the Covid-19 pandemic.

The traditional parades were cancelled last year due to the health emergency when people were asked to celebrate the event in their own homes and gardens.

Assistant Chief Constable Jonathan Roberts said he was “pleased” with how things had unfolded.

“I would like to thank and acknowledge all of the people who helped make this a safe and enjoyable day for many,” he commented.

“We will be continuing our duties throughout the night to keep our communities safe.”

The last time the Twelfth took place in 2019, the policing operation cost £1.2m.

The Parades Commission had imposed conditions on a number of marches this year.

A planned nationalist protest in west Belfast was cancelled after the Orange Order amended the proposed route.

Despite the removal of a 500-person limit on public gatherings in the NI executive’s restrictions, the Orange Order said it would stick to its original plans for scaled-down parades.

In Belfast, a number of small parades took place before the main march at 10:00 BST.

Even though the event returned this year, it was not a normal Twelfth and was organised weeks ago with health regulations in mind.

Bands gathered at Carlisle Circus in north Belfast before the scheduled walk through the city centre and onto Shaw’s Bridge in the south of the city.

No return parades or large gatherings for speeches were planned.

Seven parades took place in County Fermanagh, including in the village of Magheraveely, near Newtownbutler, which has not hosted a Twelfth for almost 100 years.

Among those watching was 98-year-old William Robinson who provided the field for the demonstration and was a young boy the last time it was held there.

The Parades Commission issued determinations on events in Belfast, Portadown, Lurgan, Bellaghy and Rasharkin; in some instances restricting march routes near flashpoint areas.

In west Belfast, a nationalist protest on Springfield Road was cancelled after the Orange Order dropped plans to walk through the gates of the Workman Avenue peace line.

In the run-up to the Twelfth, the Order had urged members, bands people and spectators to be mindful of the public health situation.

On Monday morning, the Rev Mervyn Gibson, the grand secretary of the Orange Order, welcomed the relatively low turnout of spectators at the main Belfast parade.

Mr Gibson, who watched the parade pass the Ulster Hall in Bedford Street, said he was pleased with how the day had gone given the reduction in marches as a result of the pandemic.

He said: “Of course it is different this year.

“Normally this place would be six-deep with people but actually we have achieved what we have set out to achieve, we wanted to spread the crowds across Northern Ireland.”

Each year, the Twelfth celebrations by the Orange Order mark the anniversary of the victory of Protestant William of Orange over Catholic King James II at the Battle of the Boyne in July 1690.

The Orange Order was formed near Loughgall in County Armagh in 1795, when its founding members pledged their loyalty to the royal family and swore to defend the Protestant faith.

In June, it was announced that the 2021 parades would go ahead after discussions between the Orange Order, then-First Minister Arlene Foster, Health Minister Robin Swann and Northern Ireland’s chief medical officer.

The Grand Lodge’s grand master Edward Stevenson said the day was a “great success” and had been a “welcome sight” for many people after the difficulties of the pandemic.

He said: “Today we witnessed a huge turnout at 100 parades across the province.

“Many lodges swelled with new members, excellent bands and a large turnout of spectators. Those who say our institution, our culture and traditions are dying will have been very disappointed.”

Mr Stevenson spent the day with his home district in Newtownstewart, in County Tyrone.

Published on the 13th of July 2021
Article taken from the BBC News Northern Ireland
Share this: