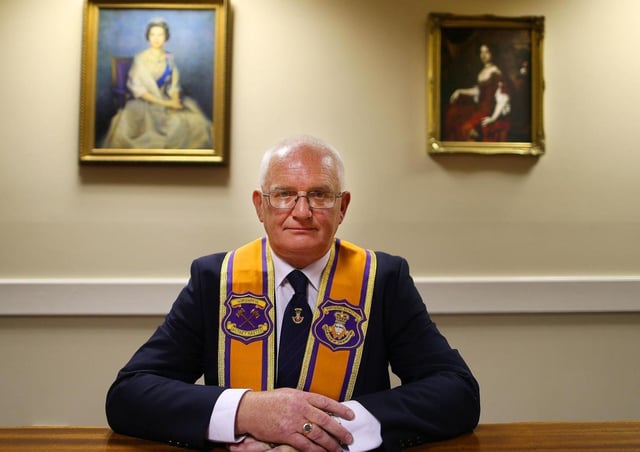 Tributes have been paid to prominent Portadown Orangeman Darryl Hewitt, who played a key role in attempting to resolve the Drumcree parading dispute.
It is understood Mr Hewitt died today after a long battle with cancer.

“It is with great sadness and a sense of shock that Portadown District LOL No1 advise of the passing of our Highly Esteemed Worshipful District Master, Worshipful Brother Darryl Hewitt,” he said.

“As you are aware, Darryl had been bravely fighting pancreatic cancer, a fight which we all thought and prayed he was winning.

“In July past, Darryl felt unwell and in August was admitted to hospital for tests. Unfortunately, these tests and scans brought bad news and on the 2nd February Darryl lost his brave fight.”

He said Mr Hewitt had been a faithful member of DerryKeevan LOL 352 for over 40 years.

“Worshipful Brother Hewitt was first elected and installed as a District Committee member in 2003, he then took office of our Worshipful District Master in January 2006.

“Over the 15 Years Worshipful Brother Hewitt has been instrumental in trying to resolve the Drumcree impasse and bring the District into the modern era. He will be sorely missed by the District Officer team and all the Brethren in Portadown District.

“We Tender our deepest and heartfelt condolences to his Wife Irene, son Bro. Steven, daughter Sarah, daughter-in-law Kelly, grandson Ollie and brother Bro. Wendell and the entire family circle at this incredibly sad and difficult time. Please keep them in your thoughts and Prayers in the days and weeks ahead.”

Within an hour of the news breaking almost 100 tributes had been made on the Portadown District Facebook page.

Former pupils paid tribute to his ability as a teacher at Ballynahinch High, while others said he had been “A fine orangeman who promoted our ethos and lived our principals”.

Published on the 2nd of February 2021
Article taken from the Belfast News Letter
Share this: