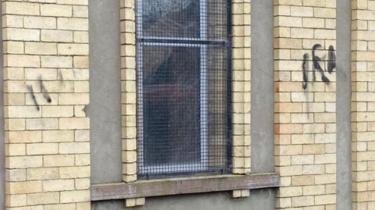 Police are treating the daubing of graffiti on a County Antrim Orange hall as a sectarian hate crime.

The damage caused to the Protestant hall on Main Street in Glenavy is believed to have occurred over the weekend.

The letters “IRA” were spray painted on the building.

Police believe the damage was done between 16:30 on Friday and 16:00 on Saturday.

“The incident is being treated as a sectarian hate crime at this time, and our enquiries are continuing,” said Sgt MacKenzie, of the Police Service of Northern Ireland (PSNI).

The hall has been the target of a number of attacks in the past.

In July last year, jars of white paint were thrown at the building.

Sinn Féin South Antrim MLA Declan Kearney said those who carried out the attack “represent nothing except sectarian bitterness”.

“Those responsible are clearly trying to provoke division and tension in an area where community relations are very integrated. But I and other political and community leaders will ensure their toxic agenda will not succeed,” he added.

Alliance Party councillor David Honeyford condemned what he described as “another mindless attack”.

“An attack like this is an attack on the entire community in Glenavy,” he said.

“Orange culture is part of what makes up Ireland and should be respected by everyone.”

Published on the 6th of January 2020
Article taken from the BBC News Northern Ireland
Share this: