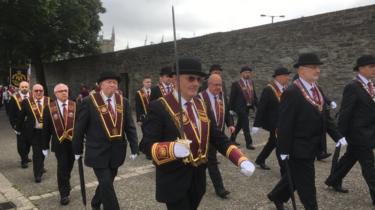 Thousands of people are in Londonderry for the annual Apprentice Boys parade.

It is one of Northern Ireland’s biggest parades and marks the anniversary of the ending of the Siege of Derry in August 1689.

Members of the Apprentice Boys, one of the Protestant Loyal Orders, make their way around the city’s historic walls accompanied by bands.

A wreath-laying ceremony at the Diamond and a religious service at St Columb’s Cathedral are also held.

The siege took place against the background of the deposed Catholic King James II’s attempt to regain his crown from his Protestant son-in-law, King William III.

Also known as William of Orange, or King Billy, the new monarch was supported by Protestants in Derry.

At the start of the siege of Londonderry in 1689, 13 apprentice boys slammed the city gates against King James’ advancing Jacobite army.

The Apprentice Boys of Derry are based upon this defiant action of “no surrender”, and hold their main parade every 12 August to celebrate the relief of the city and the end of the siege.

The ending of the siege is known as the Relief of Derry.

Published on the 10th of August 2019
Article taken from the BBC News Northern Ireland
Share this: