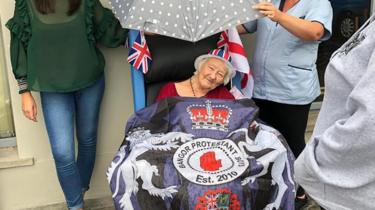 Elizabeth Neville has loved the Twelfth of July since she was a little girl.

The 91-year-old, known as Lily, fondly remembers sitting on kerbstones painted red, white and blue as bands marched through Belfast.

Ill-health has forced the great-grandmother of 14 to miss the parade in recent years, so Bramblewood Care Home, in Bangor, County Down, brought the celebrations to her.

“My heart flipped – it was absolutely brilliant,” Mrs Neville told the BBC.

When BBC News NI met Mrs Neville at Bramblewood, where she has been a resident since May, she gave us the Royal wave, “like the real Queen Elizabeth”.

Mrs Neville, who is originally from the Donegall Road area of Belfast, mentioned to a staff member last week that she missed attending the Twelfth.

After Sister Emma Ewart put out a social media post to ask for help on bringing the Twelfth to Bangor for “Bramblewood’s very own Orange Lil”, the nurse was “blown away” by the response from local bandsmen.

Earlier this week, Bangor Protestant Boys’ Flute Band played a number of songs for residents, many of whom sang and clapped along.

“The lounge at the front of the home was full – all their chairs were turned around and they were watching out the window, listening to the music and clapping along. Some of them were even sitting outside, even though it was raining, with their umbrellas up.”

Mrs Neville said her favourite song was The Sash, which she knows “all the words to”.

She added: “The band brought me a big bouquet of flowers and their flag and every one of them spoke to me and shook my hand afterwards.”

Orange Order marches commemorate the 1690 Battle of the Boyne.

The battle marked a decisive defeat for the last Catholic monarch of England and Ireland, James II, by his Protestant son-in-law, William III.

Mrs Neville says she is already looking forward to next year’s pre-Twelfth parade.

“The boss (of the band) told me they’d be there next year and the year after and the years after that. He said, ‘We’re not going to miss this for nobody’.” 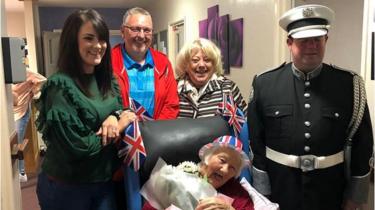 “We played a few tunes for her and she was over the moon so overall the band was very happy to do it the community and for Lily.

“We’re going to come back every year and play for her – we were more than happy to do it.”

Published on the 11th of July 2019
Article taken from the BBC News Northern Ireland
Share this: