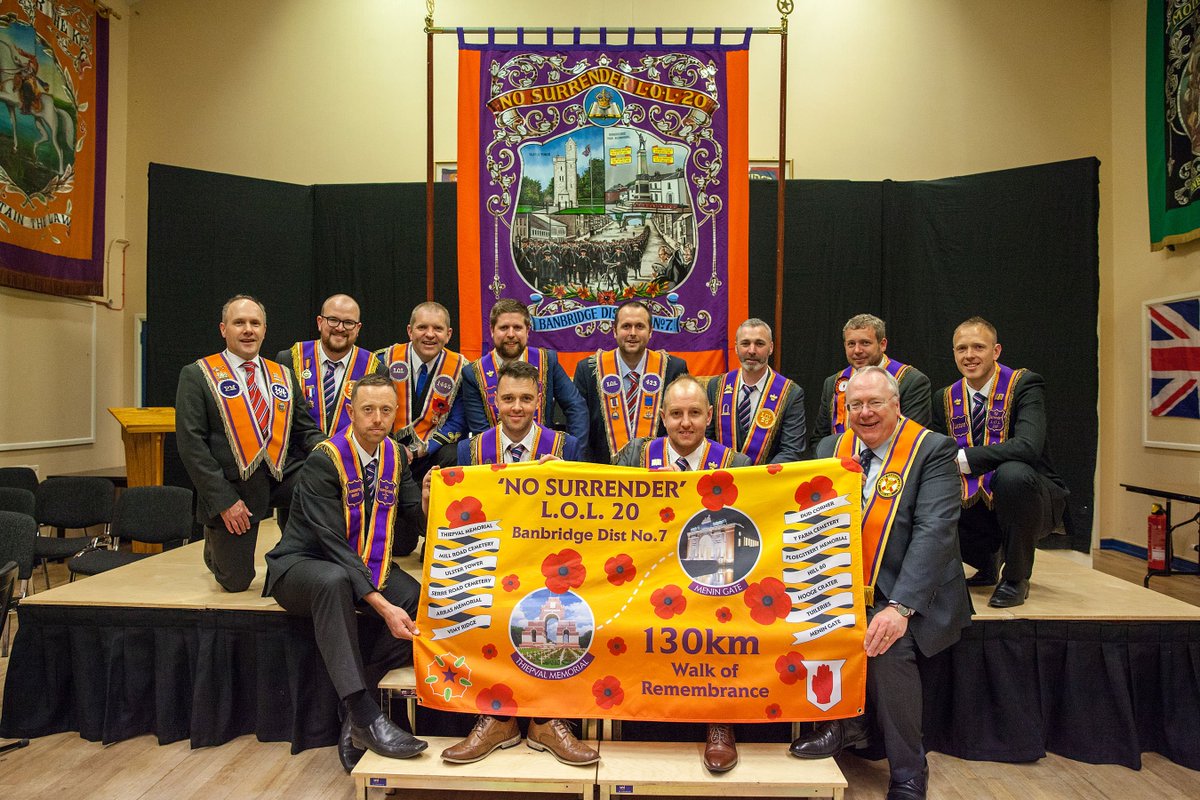 A group of local Orangemen are all set to walk the Western Front to remember the fallen of the Great War in an intrepid fundraising challenge.

This weekend, members of No Surrender LOL 20, from Banbridge and the surrounding district, will trek a mammoth 130km in a walk of remembrance, symbolically travelling from the Thiepval Memorial in France to the Menin Gate in Belgium. Seventeen participants aim to complete the historic journey over the course of four days, commencing their epic trail on Sunday morning.

Proceeds from the commemorative walk will go towards both the children’s cancer unit in the Royal Hospital and Cure4cam, aiding the local family of Cameron Truesdale (13) in their bid to raise money to travel to Mexico to receive treatment for a brain tumour.

Lodge secretary Stuart Magill said the group were in “good spirits” ahead of travelling to France.

He said: “We are all feeling good after training hard for the challenge we face of taking on a respective marathon a day for four days. There is naturally some nervousness, but we believe our preparation in terms of mountain climbs and hill walking will stand us in good stead. We hope the camaraderie among us will carry us over the finish line.”

Mr Magill maintained the challenge, due to its nature, would also have great personal poignancy for those taking part. He, himself, plans to lay a wreath in memory of his great-great uncle, William Close, on the actual 103rd anniversary of his death on the front line.

“Five of the group have direct relations who paid the ultimate sacrifice and they will all be remembered on our journey. As we walk members will be passing numerous memorials and cemeteries. At all of these stops we plan to lay wreaths.”

A total of 41 members of LOL 20 went to war over a century ago, with four killed in active service. At least 39 men from Banbridge District LOL No 7 lost their lives.

Ahead of their walk, the lodge unfurled a new banner marking the sacrifice of local Orangemen who served King and country on the frontline.

Grand Secretary of the Grand Orange Lodge of Ireland, Rev Mervyn Gibson, was also present and offered his best wishes to members ahead of their walk.

He said: “The brethren of LOL 20 are to be commended for their ingenuity and benevolence in this symbolic walk of remembrance. As well as raising funds for worthwhile causes, this initiative also serves to highlight the bravery and sacrifice of members of the Institution, and their peers, a century ago. We wish them well in their endeavours and urge members of the public to pledge their support.”

To make a donation, visit the JustGiving website, searching for walk of remembrance. Also, for live updates on the fundraiser follow ‘Walk of Remembrance May 2018’ on Facebook.

Published on the 22nd of May 2018
Article taken from the The Orange Order
Share this: